The 2018 Mountain Bike World Cup might already be history, but the battle for glory in Downhill and Cross Country is about to reach another level! The world’s best mountain bike athletes and the rising stars of the future generation will be competing for gold medals and rainbow stripes during the UCI Mountain Bike World Championships presented by Mercedes-Benz from September 5-9 in Lenzerheide. 10 athletes and one national team will be crowned as World Champions in front of tens of thousands of supporters. First though athletes in both disciplines will have to overcome the demanding tracks. Tickets for the whole week or single days are available at lenzerheide2018.com. 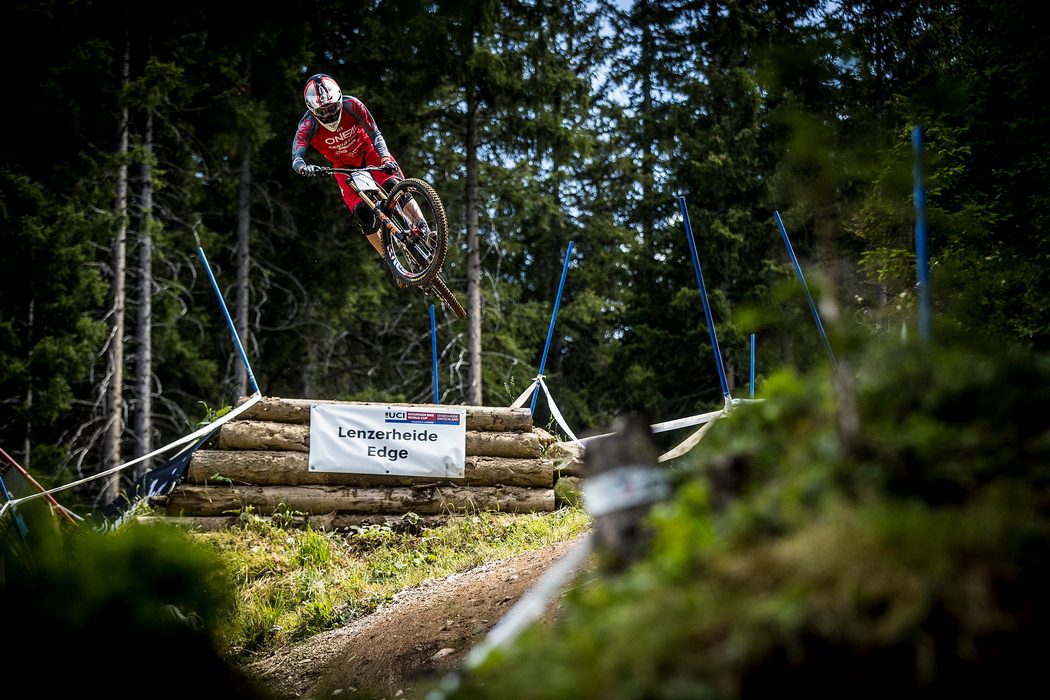 Lenzerheide’s STRAIGHTline will be mostly recognizable to the athletes, as it already presented a number of changes last year looking towards the World Championships in 2018. However one additional modification has been made to the track this year, adding another wood section. After the Road Gap in the bottom third riders will first face a series of corners before heading back into the woods earlier than in the past. The freshly prepared wood section precedes the natural one-meter drop „Mitas Wall“ and will most certainly get gnarlier as the week goes on due to underlying roots, that will become visible through the carved up dirt. The 2.2 kilometer-/ 1.4 mile-long track belongs to the fastest tracks in mountain biking and will challenge all riders with iconic features such as the impressive “Cornèrcard Rock Garden”, the high-speed “X-Class Full Gas Step Up”, “Graubünden Road Gap”, the “Lenzerheide Edge” and the “Red Bull Drop of Fame”. 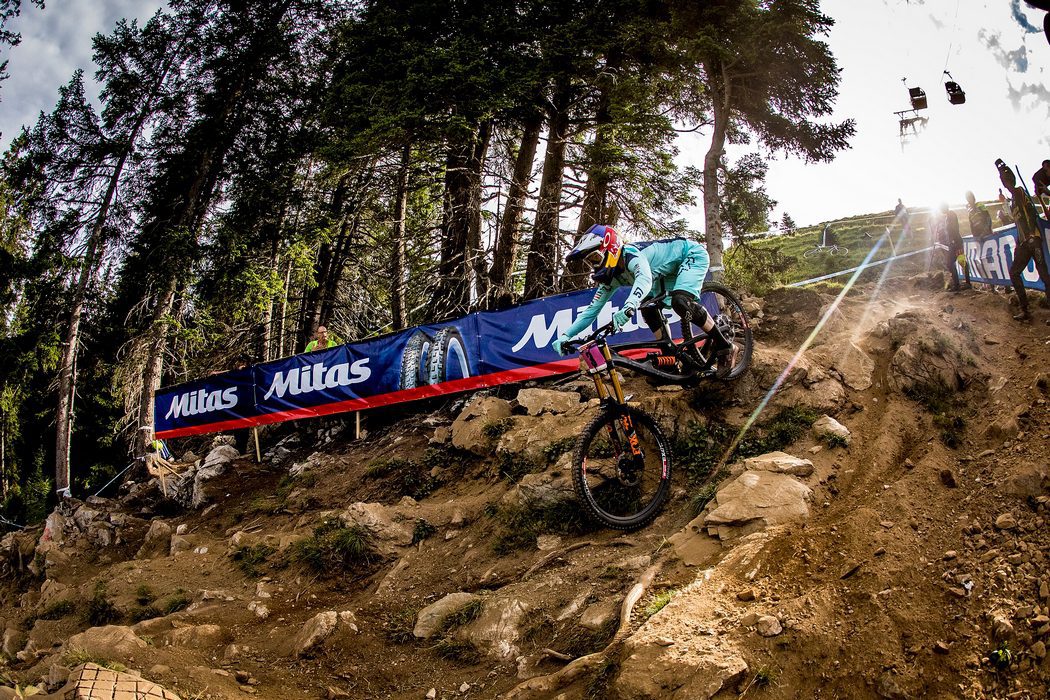 I also expect the “Ochsner Sport Cabin Hit” to be a key section. Riders need to take care to gauge their speed to not overshoot before the 90° corner. Should it be wet during the finals, which wasn’t the case in the past years, I think things will get really interesting in the rock garden up top and in the new wood section. 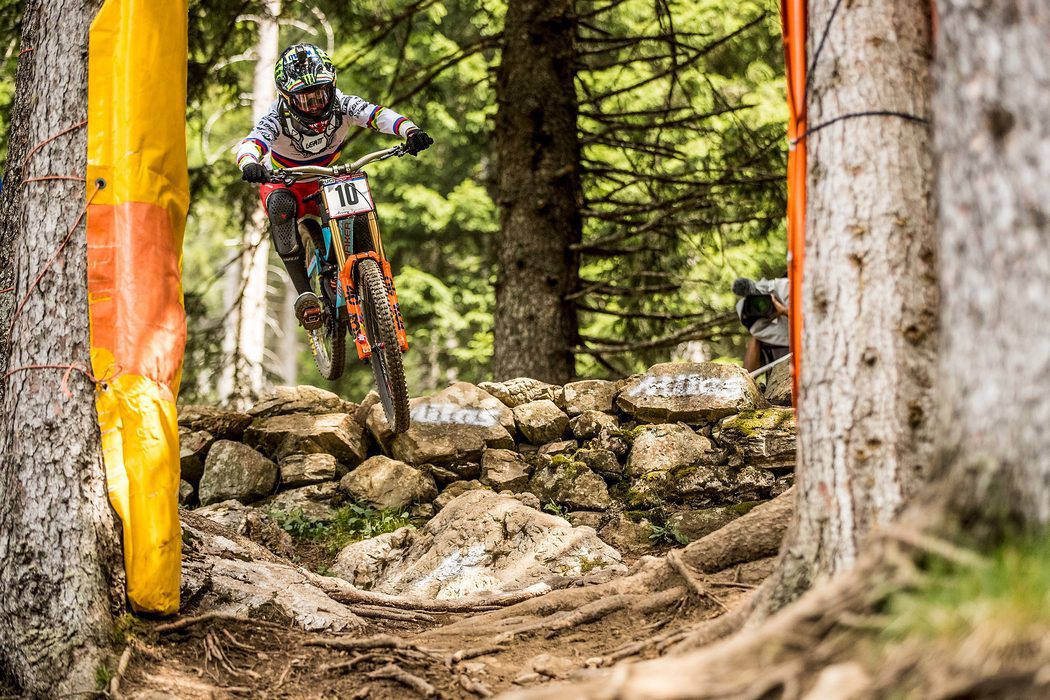 The Cross Country Course hasn’t been modified since the changes that were made last year and will once again put the legs and lungs of every athlete to the test. Things could get difficult right from the get-go. „One of the keys to being successful is the start. After the first climb the track will take the riders to “Heidi’s Hell”. If you’re not in the first group, this downhill can literally be hellish,” Rhyner thinks. “If you are hanging back, things are going to get tight.” “Heidi’s Hell” is a steep and highly technical descent that runs from the highest point of the track into a gnarly root section that will be very slippery in the wet. Athletes have to overcome an altitude difference of 188m / 616ft and a number features such as the “Lenzerheide Cliff”, the “Ochsner Sport Dual Slalom” or “Mitas Muddy Climb” on every round of the 4.2 kilometer-/ 2.6 mile-long track before they finally hit the “Cornèrcard Ramp” and the finishing straight in front of thousands of ecstatic supporters. 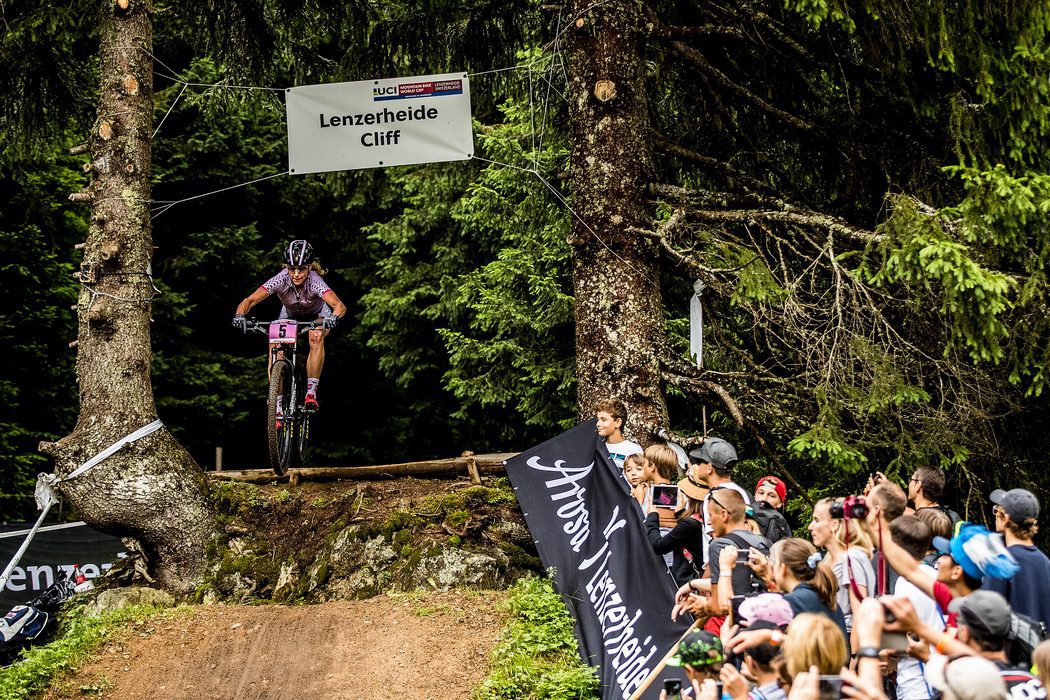 Tight Racing expected – Who is in the running?

The World Cup season was full of surprises this year, which hints at exciting races to come. World Cup Overall winner Amaury Pierron (FRA) came more or less out of nowhere this year and will certainly be able to give reigning World Champion and fellow countryman Loïc Bruni a run for his money. The list of potential World Champions certainly doesn’t end there though and seems to be longer than ever. Recovered veterans Aaron Gwin (USA) and Greg Minnaar (RSA) and other top guns such as Danny Hart (GBR), Laurie Greenland (GBR), Troy Brosnan (AUS), Loris Vergier (FRA) or Luca Shaw (USA), to name a few, will all have a shot at winning the gold medal. The women’s Downhill will be no less exciting! Rachel Atherton (GBR) was able to snatch the World Cup Title away from Tahnée Seagrave (GBR) last weekend, but expect more names in contention for the World Championship Title in Lenzerheide. Rachel Atherton, Tahnée Seagrave, Myriam Nicole (FRA) and Tracey Hannah (AUS) all have what it takes to be threatening and take the win. Swiss hopes took a blow when Emilie Siegenthaler dislocated her elbow, but the local hero has her eyes firmly set on her return to the start gate for the World Championships in her home country. 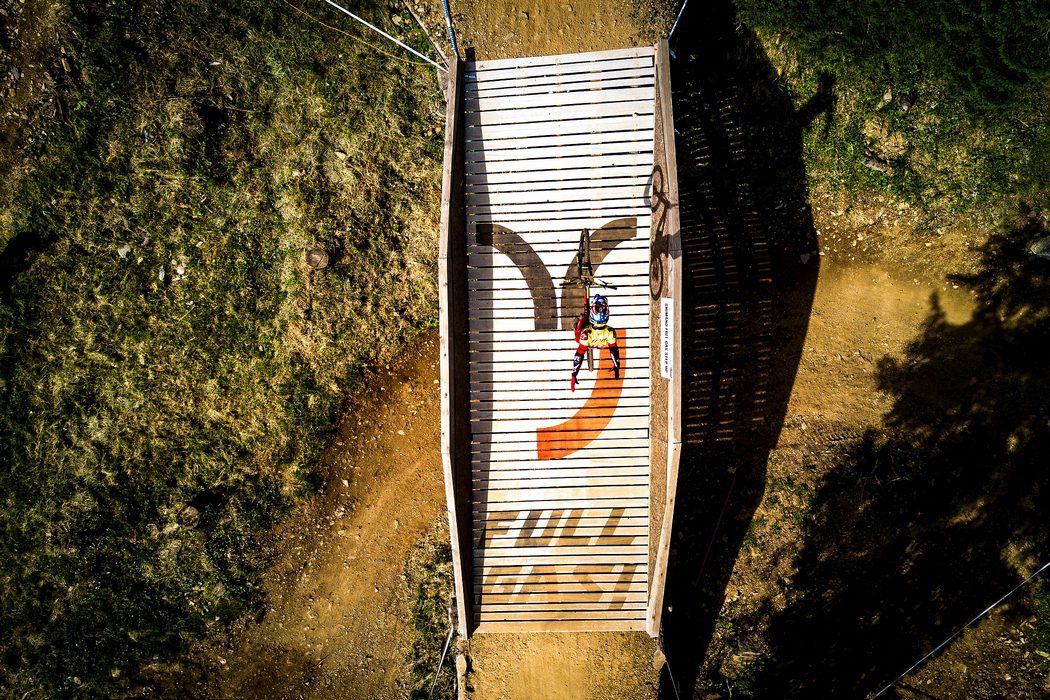 Cross Country will be an absolute highlight for the home crowd in Switzerland. With both World Cup winners Jolanda Neff and Nino Schurter rolling up to the start line to defend their World Championship Titles, the atmosphere will be at its boiling point. However, it will not be a given. Schurter had his work cut out for him during the World Cup season this year. Admittedly, he had mechanicals, which made life difficult, but still it seems as if the opposition has been able to close the gap somewhat. Schurter wasn’t a show of pure domination as he has been in the past. Mathieu Van der Poel (NED), Gerhard Kerschbaumer (ITA), Anton Cooper (NZL) and Henrique Avancini (BRA) were all prepared to challenge the Swiss winning machine and will most certainly do so in the spotlight of a World Championship as well. Sam Gaze (NZL), who was able to shock the Cross Country world with his win ahead of Nino Schurter in Stellenbosch (RSA) to kick off the season, on the other hand, will not be able to compete due to a broken wrist sustained in Mont-Sainte-Anne. The battle for the coveted rainbow stripes in the Women Elite will also be hard fought. Apart from Neff and Annika Langvad (DEN), whose duel has kept the spectators in suspense during the whole World Cup season, there is an array of athletes wanting to have a say. Maja Wloszczowska (POL), Emily Batty (CAN), Anne Tauber (NED), Pauline Ferrand-Prevot (FRA), Kate Courtney (USA) and Gunn-Rita Dahle Flesjaa (NOR) will all be in contention of snatching a medal, if not even creating an upset in the fight for gold. 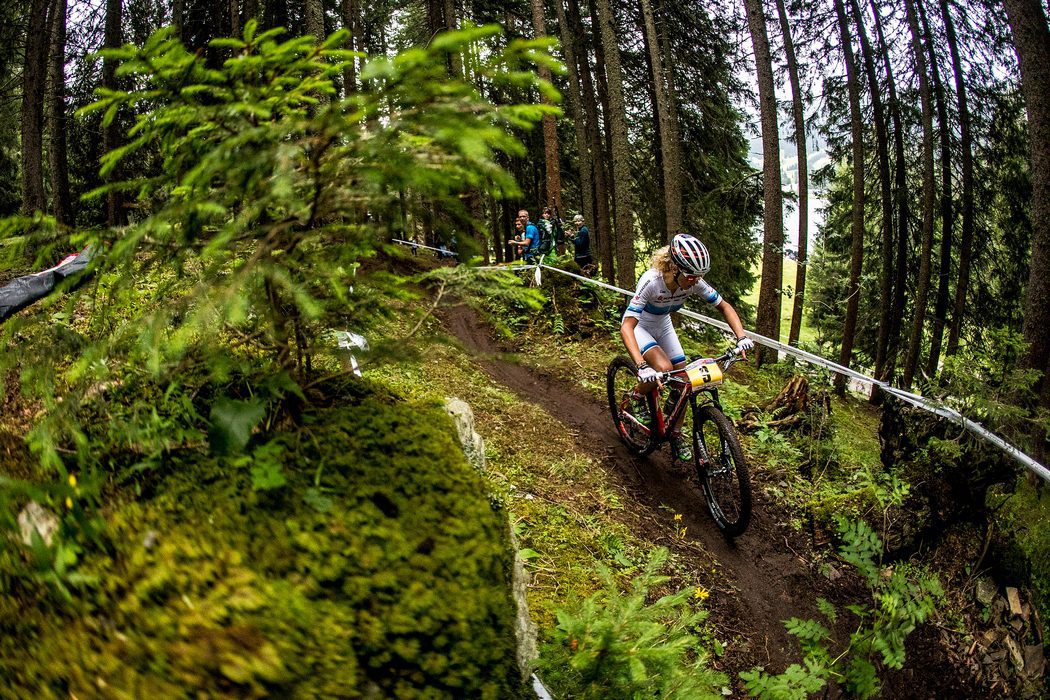 Numerous side events and parties round off the show

Apart from all the race action, spectators can look forward to numerous side events, parties and the 7,500m2 / 80,729ft2 big Expo-Area, where many exhibitors as well as all Downhill and Cross-Country teams will present themselves. Highlight are the Steinböckli Balance Bike World Championships, the Movie Night with «Free Riding Iran – The Gehrig Twins in the Land of the Mullahs» and «North of Nightfall», the #fullgasMTB Whip Off Contest, the «Flyer Uproc Dual Slalom» and countless live concerts. For more information on all side events: lenzerheide2018.ch/en/time-schedule-side-events 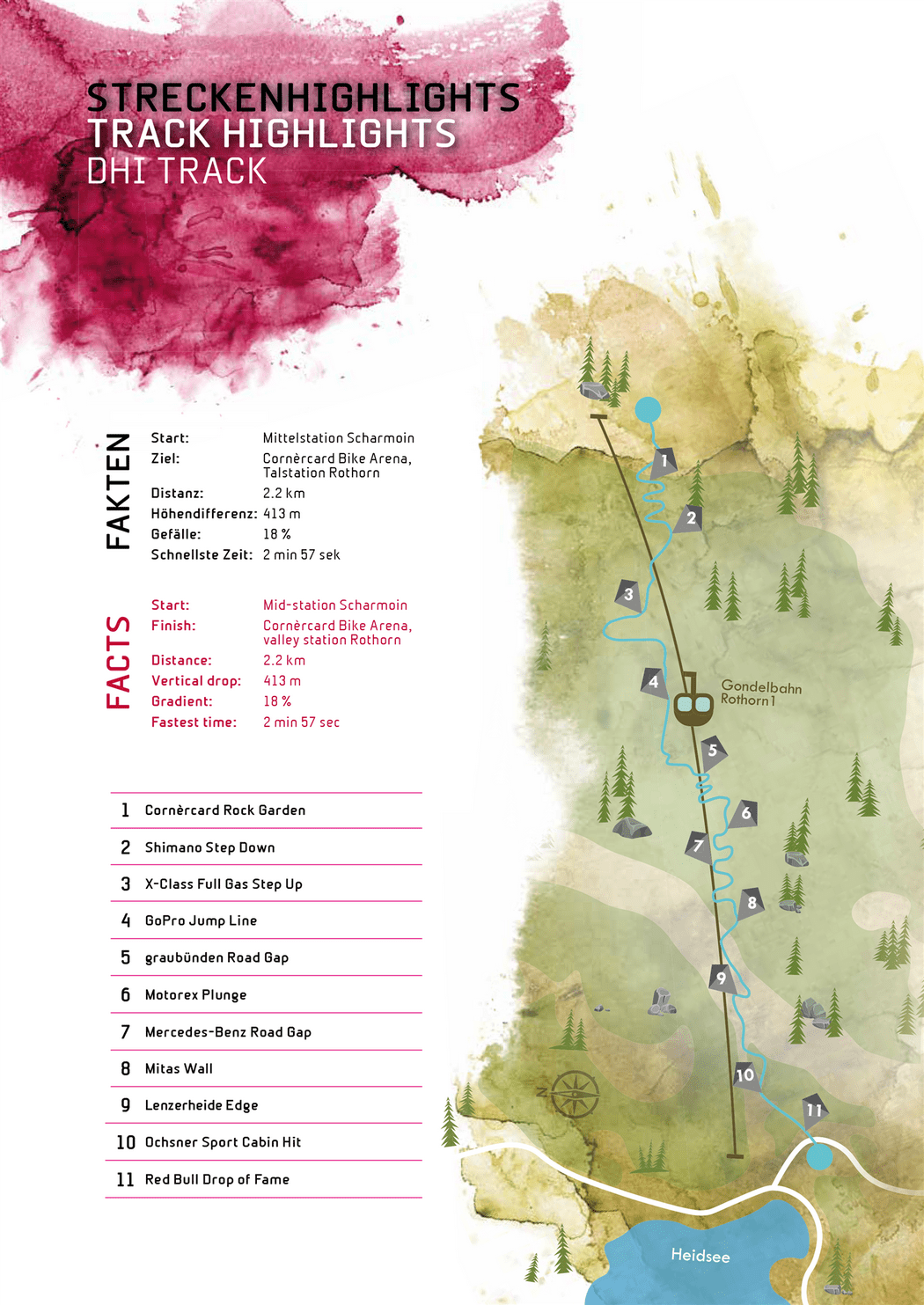 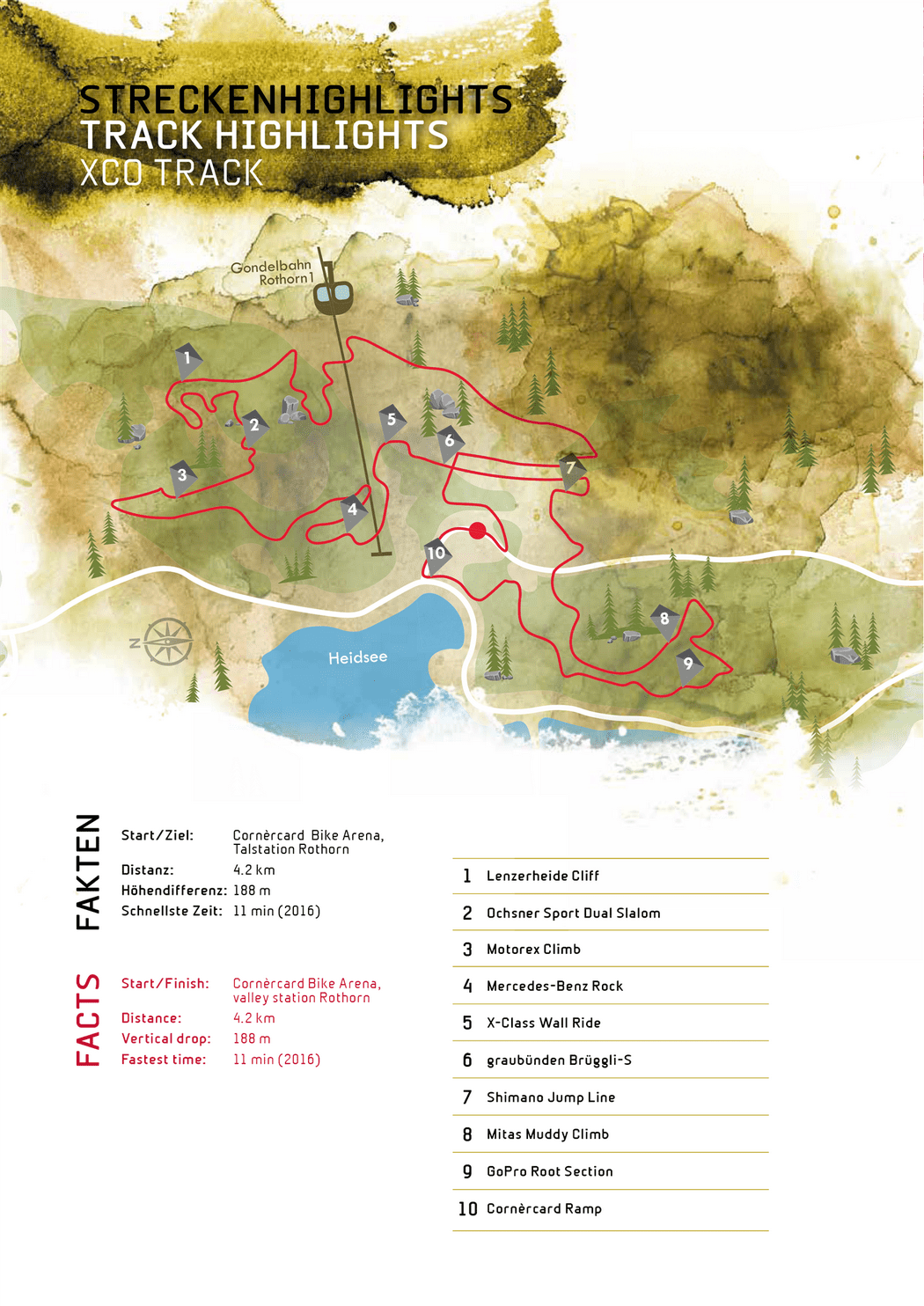