The rider line-up has been finalized, the suspense is mounting: Only 9 days left until 20 Slopestyle and Dirt Jump athletes will travel to Leogang’s Schanteilift for the 2018 FMB World Tour season opening at White Style on January 26. The unique Slopestyle contest on snow has been an integral part of the Saalfelden Leogang event calendar for years but has big changes in store for 2018! For the first time, the athletes will battle each other head to head in an elimination format, the loser of a battle drops out of the contest. Will last year’s champion Torquato Testa from Italy triumph over his opponents and defend his 2017 title? Or will Bienvenido Alba from Spain amaze fans and judges with a special piece of his trick repertoire? One thing is certain: the riders will have to show off their gnarliest trick combos and jumps in order to win the championship belt. Additionally, ambitious spectators can take part in the exciting Scott Snow Downhill Race and prove their bike skills. Intrigued to find out about the new format? White Style = Fight Style:

Incredible trick combos, technically demanding jumps and a lot of snow: welcome to White Style! During qualifying on January 26, 20 riders will be throwing their raddest tricks and awe the spectators and judges. Four of them will drop out as only 16 can reach the finals, during which things are set to heat up: in four elimination rounds, the athletes will compete head-to-head. Who will be the last man standing? 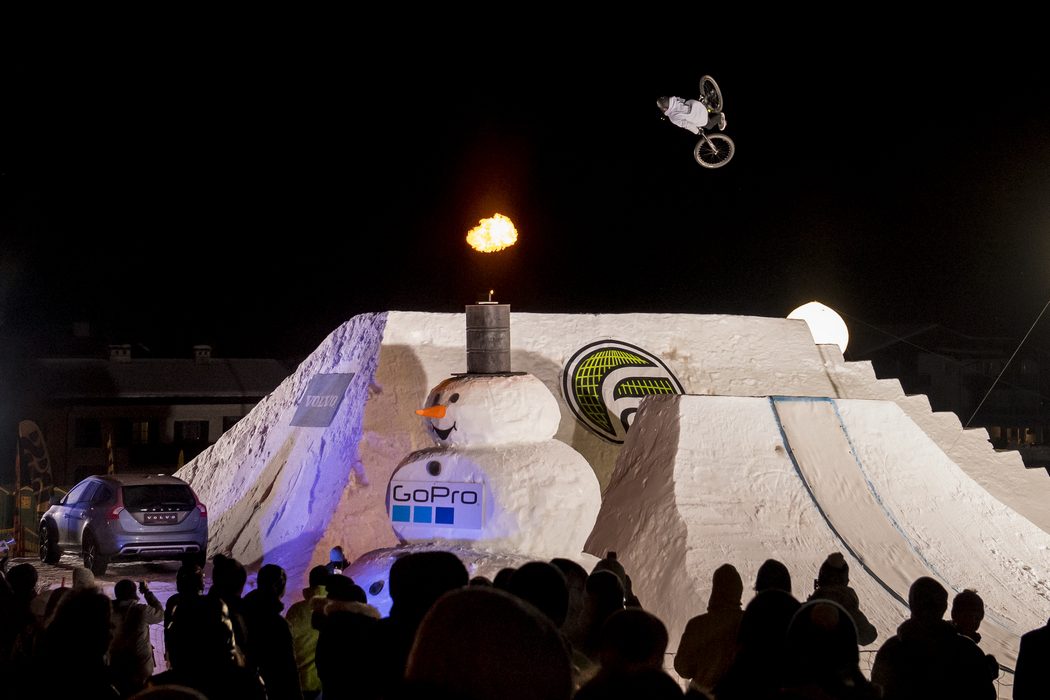 Once more, the rider line-up is massive: 20 riders from 7 nations will ‘step into the ring’ and fight for the championship belt. The main man will be Signore Torquato ‘Toto’ Testa from Italy. The defending champion threw down the biggest tricks and earned himself the White Style title last year. The ‘oppo king’ will be competing at White Style for the fourth time already, so he is definitely the most experienced rider in the line-up when it comes to snow. Last year, he made it to the top of the podium with an opposite cork 720, flip tuck over the boner log, double flip and a regular cork 720 – simply incredible! Next in line will be Simon Pagès from France who impressed last year’s crowd with a Flip Whip, a 360 Whip over the boner log, an opposite double whip on the step-up and a flip opposite whip on the last jump. A run that earned the Frenchman second place at last year’s edition of White Style. 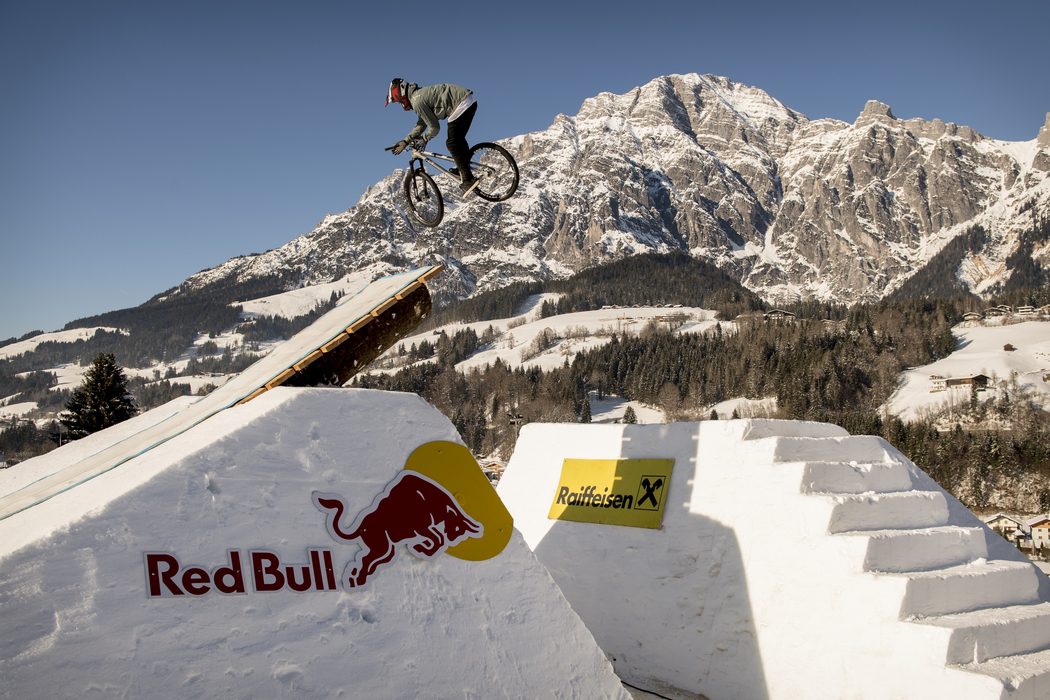 One rider who is well known for literally flying high, is Bienvenido Alba from Spain. He was ready to rumble at the Best Trick Contest of the legendary Red Bull District Ride last September where he stunned fans and judges alike with an unbelievably clean Double Frontflip.

Here is the rider line-up:

After qualifying on Friday at 4pm, we will know which 16 finalists will battle each other in the elimination rounds. The main action – namely the finals including the People’s Choice Best Trick – will start at 7:30pm. Who will come out on top? Head down to Leogang and find out! Those who won’t be able to head to the Schanteilift, can check out the later rounds live on the FMB World Tour Facebook page under facebook. 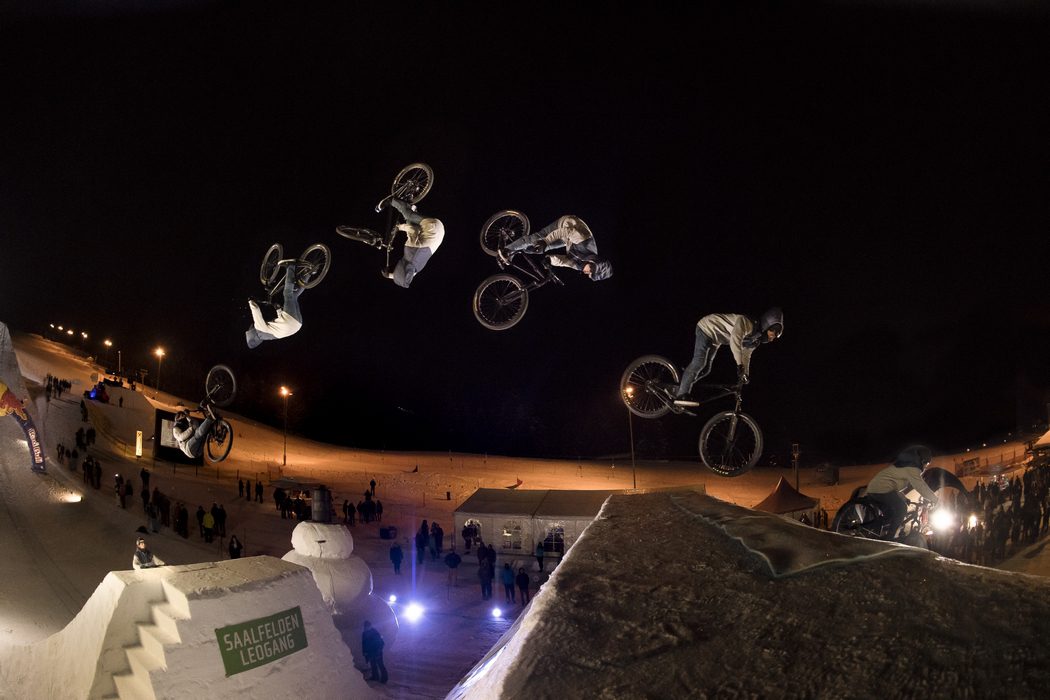 Furthermore, anyone who wants to prove his or her own mountain bike skills, can participate in the Scott Snow Downhill Race which is a part of the LINES Schneefräsn Cup. The race starts at 5pm with practice and qualifying, the final kicks off at 6:30pm. You would like to join? Just write an email to andrea.neumayr@saalfelden-leogang.at and you are on the start list. Further information here.

What is a season kick-off without a good party? After the prize giving, fans and athletes will raise the roof of the Kraller Alm from 10pm for the After-Contest-Party – the most appropriate way to complete an awesome MTB event.

All the news about White Style 2018 can be found on the Facebook Eventpage under facebook.com/events and the website under saalfelden-leogagn.com.