In a few weeks time, Serfaus-Fiss-Ladis will be taken over by mountain bike rookies, with a full week of shredding ahead of them. The MTB-Festival Serfaus-Fiss-Ladis will be welcoming hundreds of young rippers and their families to the three Tyrolean villages in Austria from July 30 to August 5. One of them will be 14-year-old mountain bike prodigy Jackson Goldstone, who will be returning with his dad Ron to improve his skills during the “Rookie Camp”, race during the “Kona Rookie Games” and have a boatload of fun. We spoke to both about biking, learning, competing and Schnitzel.

Check out the highlights from last year’s MTB-Festival Serfaus-Fiss-Ladis:

Hi Jackson, Hi Ron. How have the past months treated you?

Jackson Goldstone: We’ve had a good start to 2018. We had our first trip to New Zealand for some riding and Crankworx. It was an amazing trip and New Zealand is a beautiful place. Currently, we are in California at Woodward West for two weeks, getting some practice in before the summer really gets going. 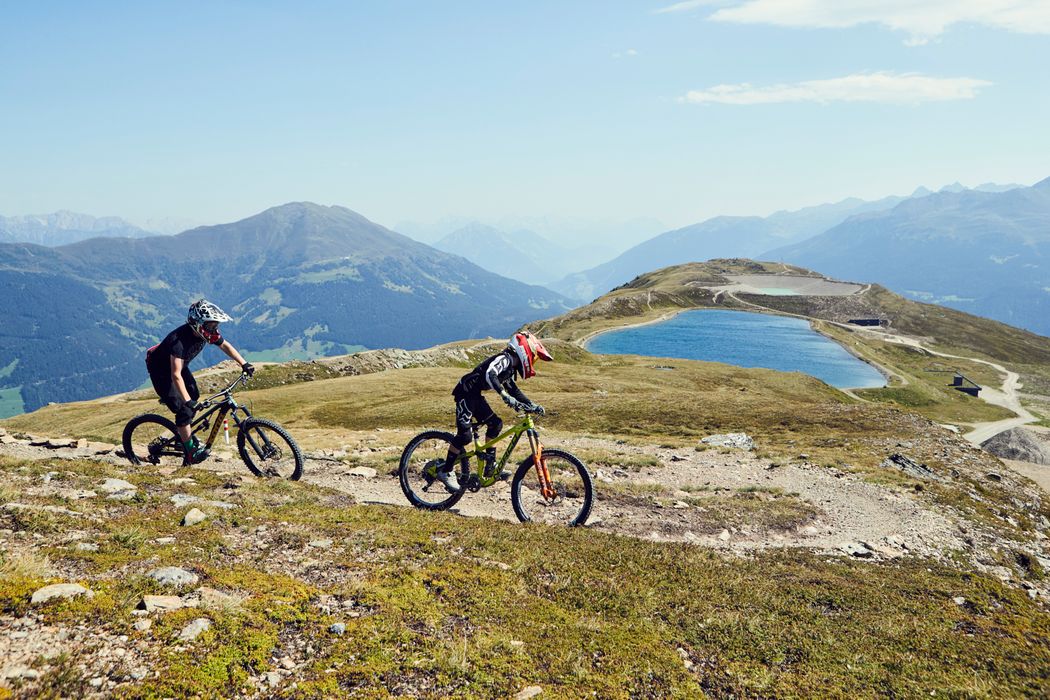 Jackson, what have you learned on the bike in the past months?

Jackson Goldstone: Not a lot of new tricks right now. I’m riding a 24” Dirt Jumper now, which has a different feel. I’m trying to get all tricks back comfortably on the bigger bike. It feels better, but will take a bit of getting used to.

How do you actually go about learning new techniques or tricks? Do you have a coach or friend who pushes you to progress?

Jackson Goldstone: It’s just practice. Most of the new stuff I try into foam pits or airbags for a long time before moving to a dirt lip. I don’t usually “just send it”, but try to make sure I’m solid before moving on. No matter how many times you try into foam, going to dirt for the first time is always scary. I think I learn the most when I’m with Jake Kinney at Woodward. He’s awesome because he will push me, but without pressure.

What are the top 5 skills and tricks on your bucket list? What do you want to get dialed next?

Jackson Goldstone: Hmm… That’s tough… I think just being more consistent with the tricks I have is the best start. For me Barspins are difficult, but important. I really want to try and nail those comfortably. Then I want to try and combine more tricks like a 360 Tailwhip and 360 Tuck-No-Hander.

You’re heading back to Austria this year. What are you looking forward to more, Schnitzel or Kaiserschmarrn?

Jackson Goldstone: Schnitzel on a bun like the one they had at the base of the bike park in Serfaus-Fiss-Ladis. I think we ate that everyday (laughs).

Which trails are you looking forward to the most?

Ron Goldstone: Frommestrail. That was my type of riding; big alpine views, sweeping corners and long descents. We don’t have that type of riding here without a massive pedal, so it was a bit of a treat.

Jackson Goldstone: I liked that too, but the Supernatural trail was fun as well. I think they did some work on it this year so I’m stoked to try it.

Jackson, you will be part of the “Rookie Camp” during the MTB-Festival Serfaus-Fiss-Ladis this year and will be railing berms and shredding trails in and around the bike park with about 30 other kids. What do you like most about participating in camps like these?

Jackson Goldstone: It’s just fun. You get to see the other riders and do cool things with them. There is a lot going on outside of riding as well, like BBQs and riding the mountain coaster. I’m looking forward to that too. Last year the scariest part of the whole trip was standing up and introducing myself to all these kids. I don’t speak German so I felt really silly. It was cool though, we all laughed at my attempt.

You are already riding at a level many dream of. What can young riders learn from camps such as this one? What are you looking to improve?

Jackson Goldstone: Thanks, I think that riding with other kids is awesome. You see someone do something and just want to try yourself. It’s good to have coaches there to point out lines, or skills, but group riding is always the best. I am looking to improve my line choice, especially in corners. Last year we walked with Si Paton and his point was you can gain .5 of a second on a jump, but there’s only a couple. If you gain .1- .2 on every corner it adds up to a better time.

Must watch! Jackson Goldstone and his dad Ron, show us how much fun family biking is:

Ron, what are the benefits of sending a son or daughter to such events?

Ron Goldstone: I think there are two parts to that. Obviously the “Rookie Camp” gives them an opportunity to meet other kids and share experiences over a longer term. For us, Jackson learned a lot about geography and also how to communicate without being able to speak the language. He had a chance to meet people from other countries, who share the love for biking and have a lot in common. I hope that this will lead to long-term friendships. The race part has different benefits, you learn about how you rank against other strong riders and how you need to improve to get faster. We live in a place where there is a TON of fast kids, so we wanted to see if Jackson was able to hang with kids from other places. He did last time, but I noticed the approach to racing is a lot different and more structured and serious in Europe. I saw a good mix of seriousness and fun.

How do you as a parent see bike festivals like the one in Serfaus-Fiss-Ladis?

Ron Goldstone: The coolest thing about Serfaus-Fiss-Ladis is that there aren’t really any “pro” riders, it’s all about the kids. That’s really unique from most of the festivals like Crankworx or Sea Otter where the kids get a chance to see the more famous riders and get pictures or whatever. They do a remarkable job of making the kids feel like they are the “pros” and try to give them the same experience. Live webcasts, good timing system, difficult track and an international field all lead to that World Cup feel. I admit I was skeptical about the “iXS International Rookies Championship” title beforehand, but after what I saw last year, I would say it’s legit. 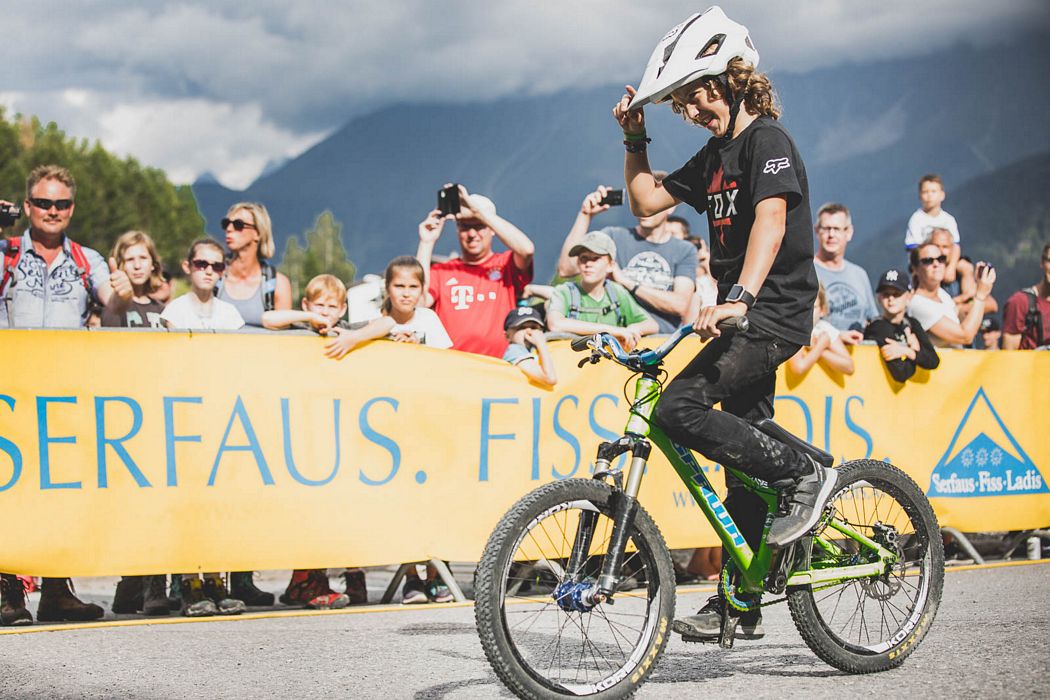 What is it like to race with kids from all over the world at an event like this?

Jackson Goldstone: It was really cool. The different languages fascinated me. You heard so many different people talking and had no idea what they are saying! I rode as much as I could with Ike Klaassen from South Africa, Nuno Zuzarte Reis from Portugal and the Kiefer brothers from Germany. I think Ike and I got along best because we both spoke English. Nuno and I had similar start times so we hung out a bit too. I’m hoping to meet up with Ike in Europe before the camp. 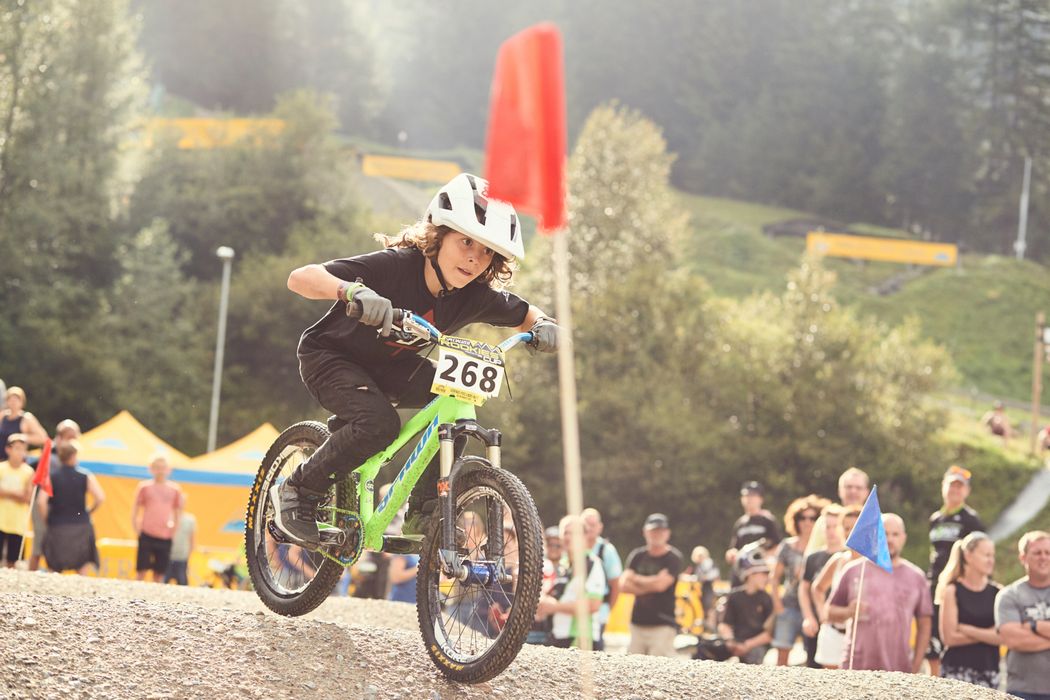 Ron, how do you value the importance of going out there to have fun, meeting other young riders and learning from each other?

Ron Goldstone: Mountain biking isn’t a competition against other riders; it’s a competition against the clock. Only you can affect how well you will do in a race run, so it’s better for everyone, if there are good riders to learn from and ride with. Some sections Jackson can teach kids on and other sections he can learn from other kids. I think a lot of what I believe comes from my experiences and BMX racing. I see a lot of kids who were great riders at 6-8 years old but were pushed into competing too much by their parents, got burned out and don’t even ride anymore. I’m lucky that Jackson has found a passion early in life, can set his own goals and knows what is important. Why would I jeopardize that by putting too much focus on results, or sponsorships etc.? I know, that one big reason why Jackson is popular is because of his personality. He’s fun to be around and genuinely loves riding his bike. That’s going to take him further in life than a trophy for winning a race.

Thank you both for taking the time! 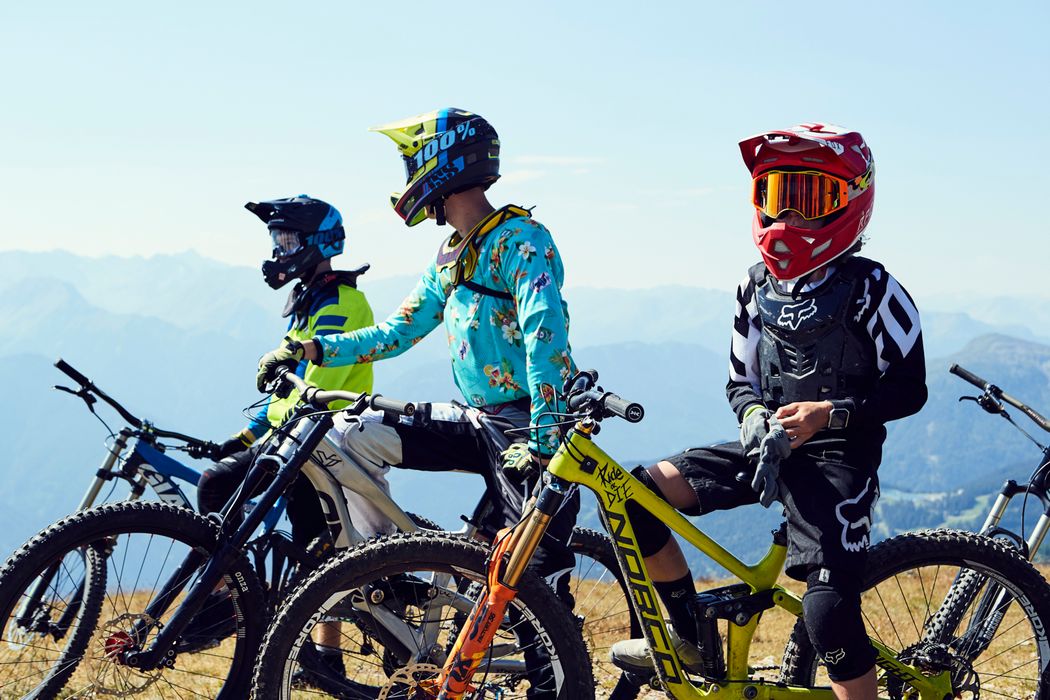 The timetable for the “Kona Rookie Games”: bike-sfl.at/en/bikepark/mtb-festival2018/timetable

Further information about biking in Serfaus-Fiss-Ladis is available on bike-sfl.at